Stretched around 13 km long beach, lies a winsome seaside resort village in East Midnapore district at the end of North Bay of Bengal, India, called Mandarmani. It is almost 185 km from my home town, Kolkata. Here, the primary attractions offered to the tourists are the tranquil beach, the placid sunrises, and sunsets near the estuary and the ornate beaches by Red ghost crabs.

After my class xii final examination, when the storm was over and everything was even-tempered, my mother suddenly decided to go on a day’s trip to Mandarmani. I’ve been there in class 9 also but I wasn’t as enthusiastic about it back then. The primary reason was that I didn’t have enough knowledge about wildlife photography and didn’t even have any proper equipment. The journey was covered by car from my home around 5 am and we reached the destination by 3 pm.

We weren’t able to recognize Mandarmani after the revisit as the hotels and resorts had been shifted from the beach because of the rising level of the sea. After lunch, I went for a stroll on the beach along with my sister and as usual, we were welcomed by the RED GHOST CRABS. 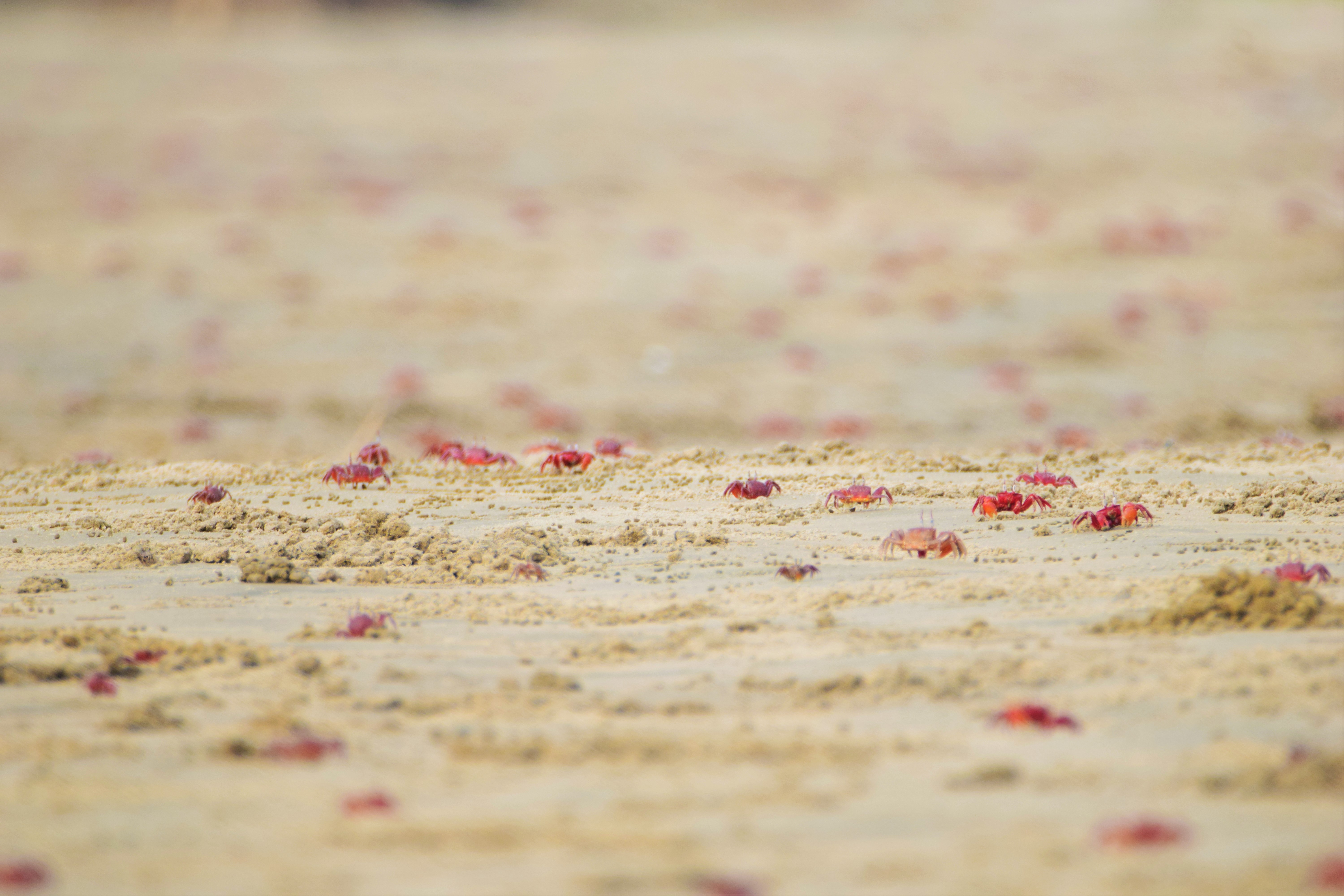 Red Ghost Crabs piling sand for food on the beach of Mandarmani.

It was evening and the beach was adorned by these august creatures. I couldn’t get their close up that day because there were very few of them as it was the time of high tide, the waves were already touching the foot of the entrance on the seaside of our hotel and we had to return. I had planned to take seascapes and carried a tripod as well but unfortunately, the weather was overcast. I could barely see the sunset. Later, around 6 pm my family went to Digha, I stayed back as I was enjoying the peaceful atmosphere, sitting in the hotel lawn, facing the sea, rejoicing the enchanting breeze. My family returned around 9 pm and after having dinner, I took an off for the day.

The next morning, I woke up around 5 am and without having breakfast I went straight to the beach. The weather was the same as the previous day. The high tide was gone, the sea had shifted back. From far away I could spot some Little plovers collecting there morning snack, Wagtails, Crabs, Sea stars and some other creatures.

A dead carcass of a stingray

The exoskeleton of a Purple Crab

What I saw next was my dream bird for a long time.
An Indian Roller (Coracias benghalensis) sitting on a lonely perch, near the entrance of the forest, along the beach. At first, I wasn’t sure of it as I saw it from a distance. But I didn’t want to miss it at any cost. So, I approached it with a lot of patience, took almost 3-4 shots at each step while getting closer. And the final result was supercalifragilisticexpialidocious, in other words, amazing. 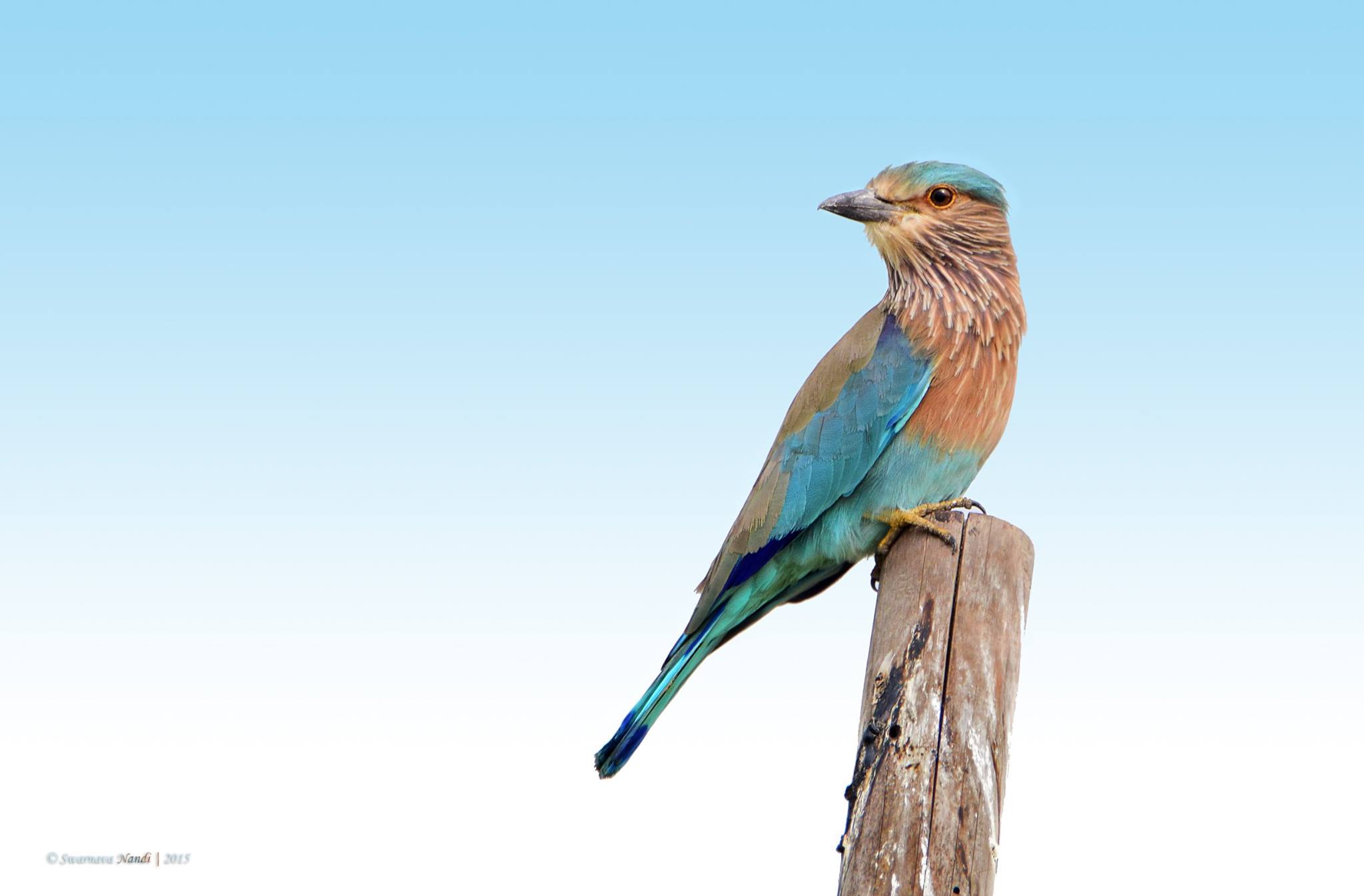 I continued my stroll along the sea, that had moved back, leaving washed off sea stars, dead carcasses of fishes, sting rays, etc. scattered on the beach. Then I came along the scattered ghost crabs again. This time there were plenty of them and they all were busy collecting microscopic food particles from the sand, minerals, etc, pilling the sand into small oval shapes. I had my newly bought Tamron 160-600mm and Nikon D5300 then and I wanted to get close-ups of these spectacular creatures. Most of the time, before I could get close enough they would scuttle into their burrows. Almost after half an hour, crawling on the sand, I managed to get one and it was awe-inspiring.

These little red crustaceans are simply awesome to watch. One who has an interest in nature can sit down and spend the entire evening watching them pile up sand with their claws and skilfully filtering the sand from their rostrum just taking the food particles in. Ghost crabs are nocturnal in nature, i.e, they stay mainly active all through the night, and that is where they get the name from. There are few interesting facts about these crabs:-

Red ghost crabs are an endangered species, a few years ago when this place was converted into a tourist spot, many beach activities started eventually, later, thankfully the govt. of Bhuvneshwar and Odisha took initiatives to close down these activities to protect the habitat of these red crabs. During the monsoon, even road-signs are put up, saying crabs crossing area to slow down vehicles as monsoons are the breeding season of the crabs and they tend to cross roads in large numbers from the forest to the sea looking for mates. If you visit Mandarmani or Talsari area during this time, you will find the beach encrusted in red sheets.

Before visiting Mandarmani I wasn’t sure of how satisfactory this trip shall be, as it was just for a day, but I guess these ghost crabs made the trip worthy. After having lunch, we departed for our home.

Apart from the ghost crabs I also found Green bee-eater, Chestnut-headed Bee-eater, Pied Kingfisher, Small kingfisher, Shikra, Orioles, Sunbirds, Coucals, Cuckoos, Plovers, and a female Black-headed redstart. Though I couldn’t manage to photograph all of them, the ones I did, are attached below…

This post is not from any recent trip, previously I posted this in WordPress.com and now re-posting it in my own Blog.

If you have any questions then mail me at mailme@swarnavanandi.com

Thank you for reading!

More from my site

This error message is only visible to WordPress admins